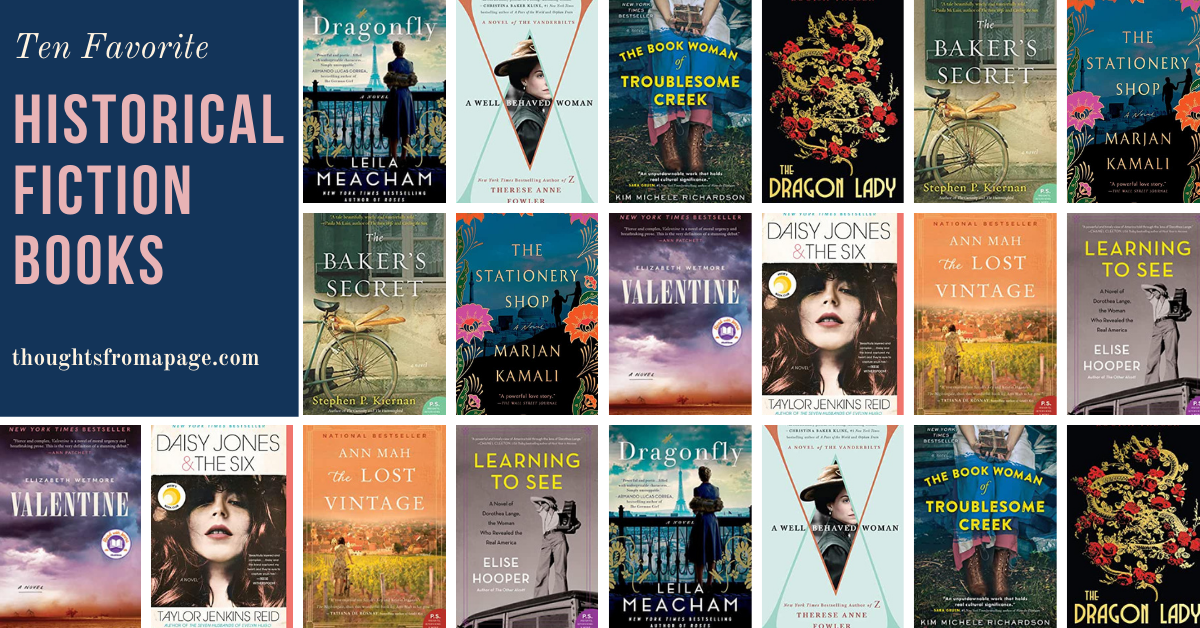 Historical fiction is one of my favorite genres and is probably the one that I read the most.  I love being transported back in time to another place.

Here are ten of my all-time favorite titles in the genre that I frequently recommend to people: 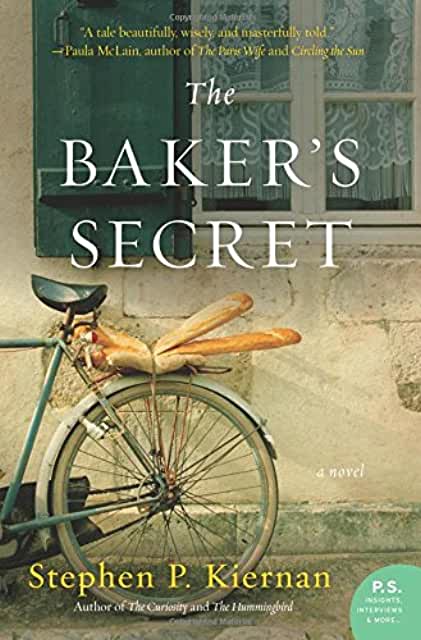 The Baker's Secret by Stephen P. Kiernan - The Baker’s Secret takes place in Le Verger, a French town on the Normandy coast, on the eve of D-Day. The town is occupied by the Nazis who have beaten down the townspeople with countless acts of cruelty including rationing food to the point that everyone is slowly starving. Kiernan tells the tale of the courageous baker Emmanuelle and her fellow villagers who worked to defy the Nazis in their own subtle ways. The Baker’s Secret is a tear-jerker (have plenty of tissues handy), but the book’s message is one of optimism and the ability of humans to overcome even the most tragic circumstances. 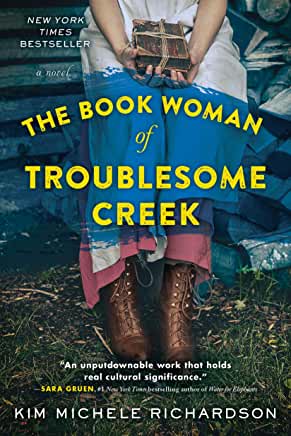 The Book Woman of Troublesome Creek by Kim Michele Richardson - The Book Woman of Troublesome Creek is a tale of family, prejudice, and perseverance, and one woman’s determination to find her own way despite her hardscrabble existence. Richardson features numerous issues from 1930’s Kentucky - horrific coal mining conditions, the true blue-skinned people that lived in Appalachia, and the Pack Horse library service. The story is also a beautiful tribute to literature and the power of reading. 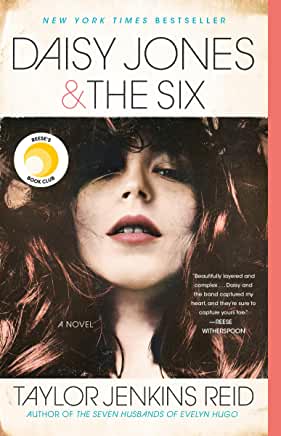 Daisy Jones and the Six by Taylor Jenkins Reid - Daisy Jones and the Six is a fictional band that made it big in the 1970s and who dealt with everything fame brings – drugs, worshipping fans, no privacy, and competing egos. Years later, an interviewer (whose identity is unknown to the reader) compiles an oral history of the band and its rise to fame. After completing interviews with the band and other involved individuals, the interviewer combines the band’s tale into one long chronology which hilariously and at times heartbreakingly tells the band members’ stories from different perspectives. 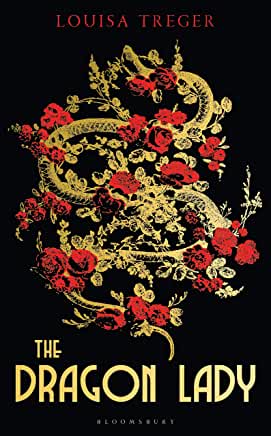 The Dragon Lady by Louisa Treger - The Dragon Lady tells the story of Virginia “Ginie” Courtauld, her husband Stephen and their time in Rhodesia before the colony succeeded with its independence quest and became Zimbabwe. Ginie was an independent, free-thinking woman who opted to push for the necessary social changes she knew should happen even when those views made her incredibly unpopular with her peers. Particularly fascinating are the portions of the story about Rhodesia’s quest for independence including an actual meeting the Courtaulds had with Robert Mugabe prior to his ascent to power. 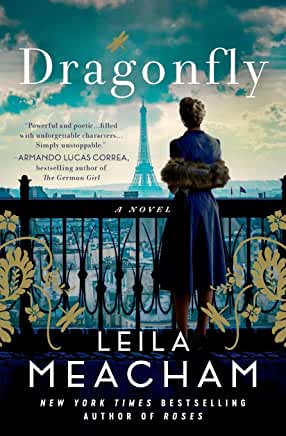 Dragonfly by Leila Meacham - Leila Meacham’s incredible World War II saga chronicles a fictional team of young Americans recruited as OSS agents to infiltrate German-occupied Paris. The genius of Dragonfly is Meacham’s ability to vividly portray occupied Paris and the treachery that constantly existed for those working to remove Hitler and the Nazis from power. Clever, suspenseful and character-driven, Dragonfly is a tour-de-force. 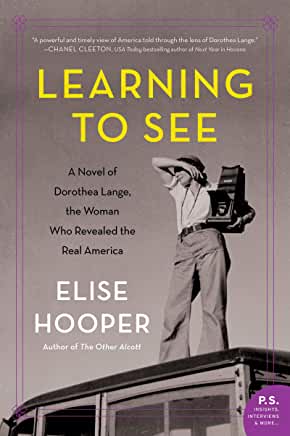 Learning to See by Elise Hooper - Dorothea Lange’s photographs from the Great Depression, and the Japanese American internment camps to a lesser extent, are iconic and part of the fabric of our culture, but the story of her life is less well known.  Hooper’s novel tells Lange’s tale including the sacrifices she made to bring about social change for the less fortunate.  Learning to See is a fabulous tale from start to finish, and the inclusion of some of Lange’s photographs at the end of the novel are an added bonus. 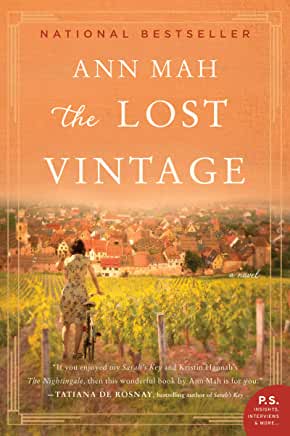 The Lost Vintage by Ann Mah - The Lost Vintage is a beautifully crafted tale focusing on the French Resistance during and after the war. In the present-day tale, Kate is studying to pass the Master of Wine Examination and travels to her family’s estate in Burgundy to attempt to master the Burgundian vintages. While there, she uncovers a hidden room filled with World War II resistance pamphlets and a vast amount of valuable wine. Spurred on by her discovery, Kate delves into her family’s past and uncovers a great aunt named Helene who was expunged from the family history because she had been labeled a collaborator following the war. Mah’s novel addresses the way the French dealt with collaborators, particularly women, following the war and the way these women were treated once denounced as collaborators (with or without evidence). 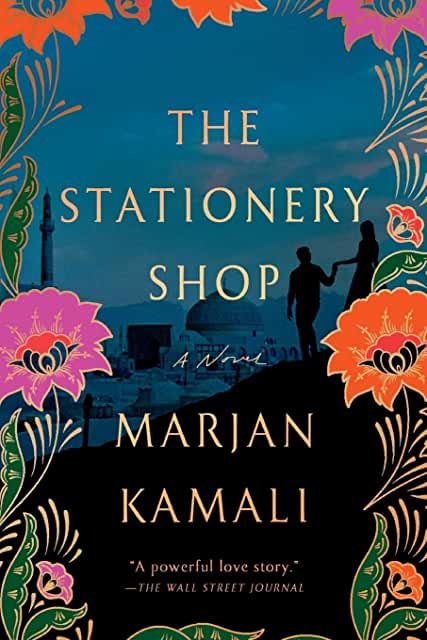 The Stationery Shop by Marjan Kamali - Roya and Bahman meet and fall in love in a neighborhood book and stationery shop in 1953 Tehran. The night before their wedding, the pair agree to meet at the town square, but violence breaks out related to the Iranian Revolution, and Bahman disappears. Decades later a twist of fate reunites the pair and offers Roya the opportunity to question Bahman about his whereabouts over the years and his seemingly easy ability to disregard their relationship. The Stationery Shop is a beautiful tale of sacrifice and the length people will go to for love. 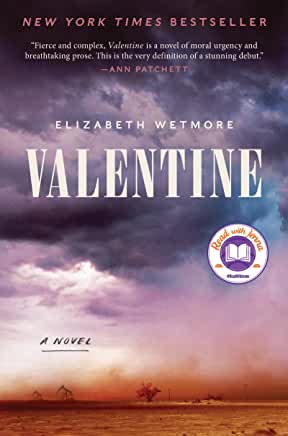 Valentine by Elizabeth Wetmore - Wetmore’s debut novel takes place in 1976 Odessa, Texas, a town filled with men who have come to work in the oil fields. Following the brutal attack of a teenage girl by an oil field worker, the town struggles to come to terms with the crime, and battle lines are drawn. Wetmore’s lyrical prose and stark descriptions of the dusty landscape and impact of oil discovery on the region create a haunting and ultimately redemptive tale that I could not put down until I reached the last page. 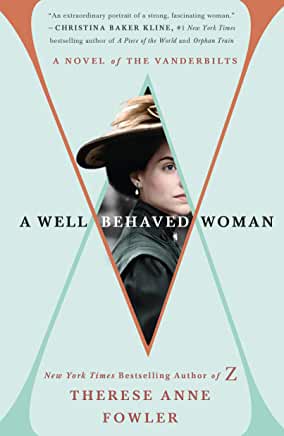 A Well-Behaved Woman: A Novel of the Vanderbilts by Therese Anne Fowler - A Well-Behaved Woman tells the story of Alva Vanderbilt and her determination to succeed in cut-throat, Gilded-Age New York. She hailed from a Southern family who lost their fortune after the Civil War and managed to marry into the Vanderbilt dynasty. In addition to shaking up the wealthy social circles in New York City, Alva was a prominent supporter of the women’s suffrage movement and was vocal about women’s rights, most often asserting power in her own marriage and encouraging others to do the same.

I hope you enjoy reading about my selections, and if you decide to read any of them, I cannot wait to hear what you think. Also, feel free to share some of your favorites with me. You can comment below or send me a message here. 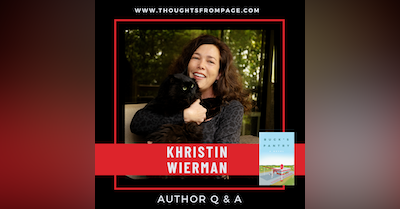 Q & A with Khristin Wierman, author of BUCK'S PANTRY 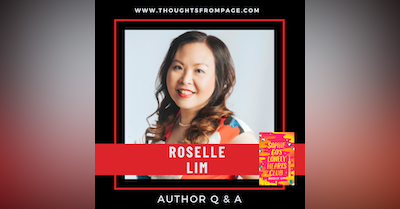