Q & A with Heather Frimmer, Author of BETTER TO TRUST 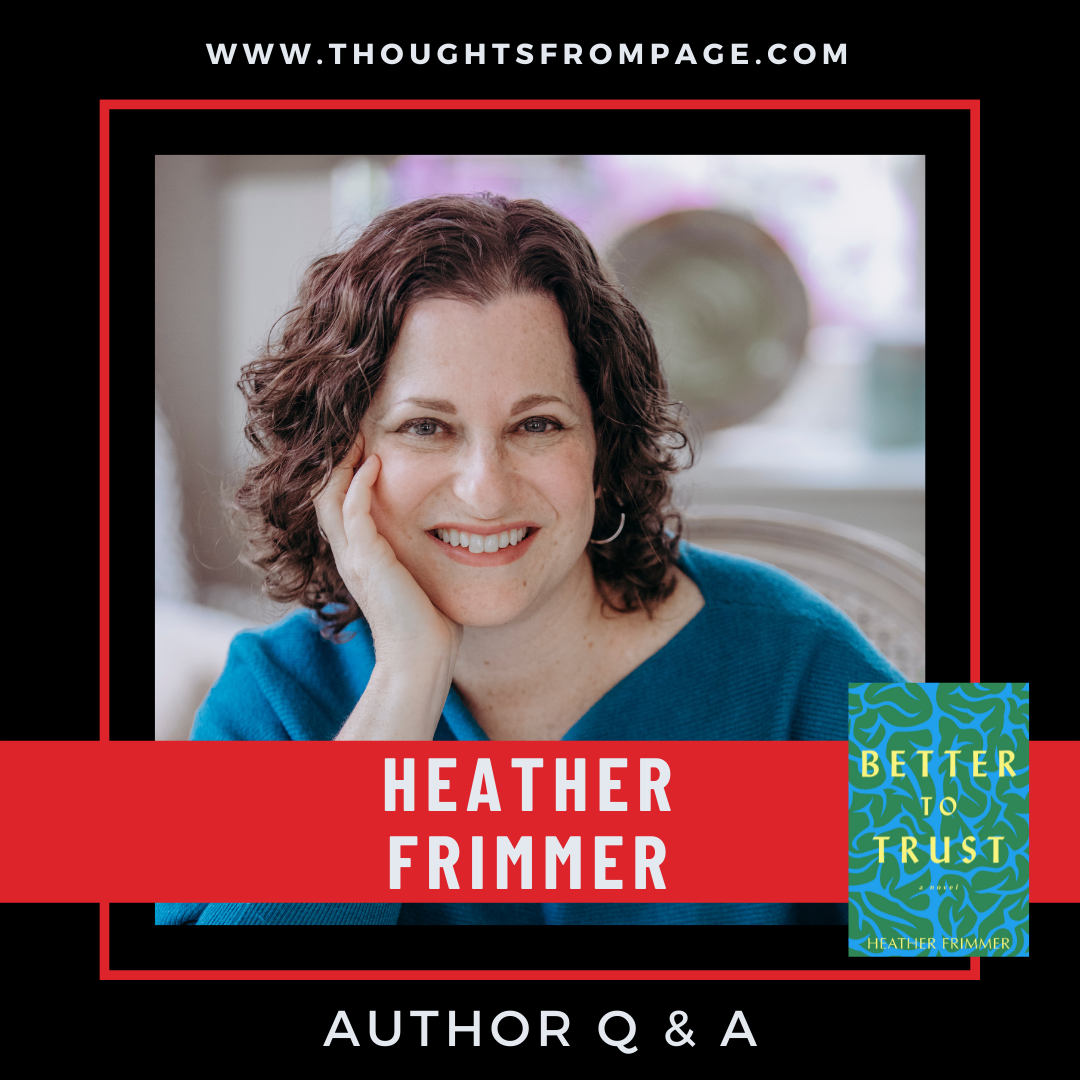 She lives in suburban Connecticut with her husband, a trained actor and middle school teacher and their two children. Better to Trust is her second novel. Learn more at heatherfrimmer.com.

Synopsis of Better to Trust from the publisher:

Frimmer, a radiologist specializing in emergency and breast imaging, scatters little pieces of her life throughout her work and looks for ideas everywhere. Better to Trust was inspired by an acquaintance who successfully performed a minor surgery on a family member. Fascinated by an alternative, “what if” scenario, Frimmer explored the consequences – and resulting fallout – of a major surgery that didn’t go as planned.

When Alison Jacobs needs brain surgery, she places ultimate trust in her sister’s husband, Grant Kaplan, a world-renowned neurosurgeon and expert in treating her condition. But Grant is hiding a dark secret which threatens the outcome: an addiction to prescription pills. As Alison struggles to rebuild her life, Grant’s daughter, Sadie, spends more time with a new friend. Frustrated that her parents exclude her from the conversations about her beloved aunt, Sadie makes increasingly risky choices which could endanger not only her, but her entire family.

Meanwhile, Alison is also harboring her own secret – an extramarital affair with a woman. Her close call with mortality spurs her to take a closer look at her marriage, explore her newfound sexuality and figure out what she wants for her future. How can she rebuild her life and move forward? Is there any way to repair her broken relationship with her only sister?

Heather answers some questions that I posed to her about Better to Trust:

1.  What inspired you to start writing?

In 2014, I decided to take an introductory writing class at Westport Writers’ Workshop. After working as a physician full-time for fifteen years, I felt like I needed to clear the cobwebs from the creative side of my brain. Now, I have a healthy addiction to putting words on the page and I wouldn’t have it any other way. This second career and the amazing book people I’ve met along the way have added a wonderful dimension to my life. The idea for Better to Trust came to me when an acquaintance told me her husband had successfully performed a minor operation on another family member. This story gave me an amazing case of the what ifs. What if it was a major operation and what if the surgery wasn’t so successful?

Since the topics in this book are not directly related to my day job, I read up a lot on stroke, aphasia, neurosurgery and addiction. I also found an incredible group of beta readers, including neurologists, neurosurgeons, addiction specialists, speech pathologists and members of the LGBTQ+ community. I asked them to be honest about any parts that didn’t ring true and suggest ways to revise accordingly.

My current publisher is incredibly collaborative with cover design. She asked me what I had in mind for the cover. I suggested the color scheme, background design and title font. I couldn’t be happier with the way it turned out. The cover is a standout. Despite the saying, people definitely do judge a book by its cover.

I was a competitive figure skater until the age of fourteen. By competitive, I mean that I was on a team that travelled all over the eastern seaboard to competitions, not that I was particularly talented. When I began high school, I decided to hang up my skates to focus my energy on schoolwork. The countless hours I spent doing crossovers and spins in a frigid rink inspired the character of Sadie in Better to Trust.

My work in progress centers on an obstetrician struggling with an anxiety disorder and a patient who is suing her for malpractice. I can’t share much more because I’m still figuring it out myself.

I am an avid, bordering on obsessive reader, often tallying more than 100 books per year. I have a particular soft spot for novels written from multiple points of view. Seeing a story from different angles paints a more well-rounded picture, probably the reason I structure my own books this way. Recent favorites include No Hiding in Boise by Kim Hooper (the audiobook is narrated by a full cast and is phenomenal), One Two Three by Laurie Frankel, A Million Reasons Why by Jessica Strawser, Last Summer at the Golden Hotel by Elyssa Friedland and Blush by Jamie Brenner. I am currently reading another gem that fits that bill: A House Full of Windsor by Kristin Contino. 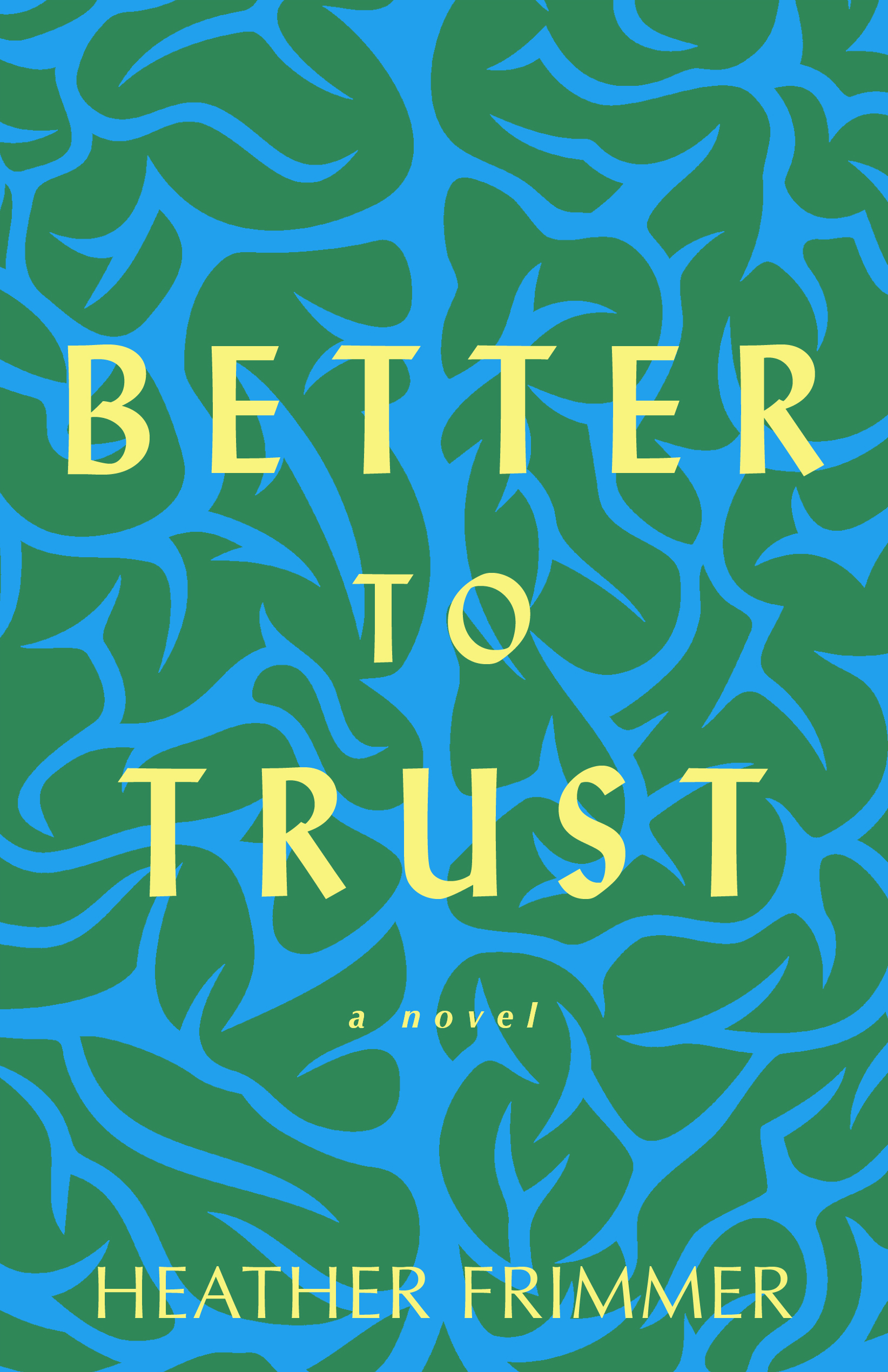