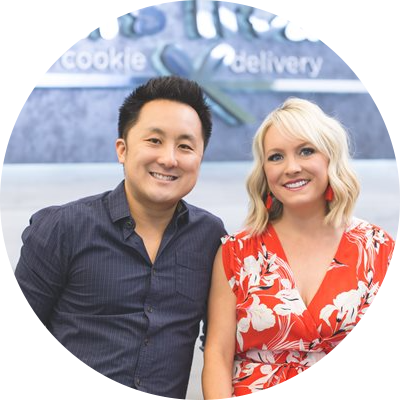 Tiffany and Leon Chen started the nation’s first on-demand, baked-to-order warm cookie delivery brand in 1999 as 19-year-old sophomores while in college. Over the next 20+ years, they've grown the business from one store to over 74 locations and counting, employing thousands and being valued at over $500 million dollars. They both graduated from The University of Texas at Austin in 2001 and live in Austin with their boy/girl twins. In addition to running Tiff’s Treats, they often keynote at events such as SXSW and for companies like Southwest Airlines and Dell Technologies. They've been chosen as Ernst and Young Entrepreneurs of the Year and Leon has been named as an Outstanding Young Texas Ex. They are also investors in dozens of other companies and are active in supporting local non-profits such as Foster Angels of Central Texas, The Andy Roddick Foundation and the ConnorMan Foundation.

Interview with Tiffany and Leon Chen - IT'S NOT JUST COOKIES

In this interview, Tiffany, Leon, and I discuss It's Not Just Cookies, the fact that this is the first time that they are publishing any of their recipes, telling their story and sharing about the business and how much it has grown, why they decided to write the book now, sone of their favorite "Warm Moments" in the book, and much more.